Lixouri is the second largest town in the island of Kefalonia and has about 9800 inhabitants. The town has an important harbour as well as a philharmonic orchestra and a college of instrument making. Lixouri is located close to the ancient city Pale on the peninsula of Paliki. In one area of Lixouri is the vineyard Gentilini.

After the earthquake the town was rebuilt mostly after the old layout, contrary to urban planners' advice. Churches and some other important buildings (that were often only partially damaged) were rebuilt. At the main square with the big rubber plant, the Plateia, are coffee houses and the confectionery Mavroidis, founded in 1922. The square's eastern narrow side forms the harbour and leads to the promenade, where other cafés and restaurants are located.

In 2003, the town decided to reconstruct the square. The “New Markato” was built and is now a theatre that houses some shops on the ground-floor. Right up to the Plateia, the former shopping arcade was knocked down for the benefit of two gatehouses. These two form an architectonic transition from the theatre to the busy square that, as in all Greek cities, takes the key role in city life. Here meet friends and strangers, here take place performances and events.

The beach of Lixouri, named Xi, is perfect for a holiday at the seaside with the whole family because of the shallow water. The particularity of this beach is the red sand, which still can be found there.

It is a paradise for surfers and sailors, because of the long beaches. This area with its sheer walls offers divers a beautiful underwater world with its wrecks. Furthermore one can borrow jet skis, pedal oats and motorboats. Various taverns and bars also provide sustenance.

You can easily reach Lixouri by a ferry or you take a bypass route and enjoy the magnificent panorama until your arrival. 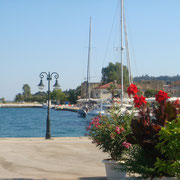 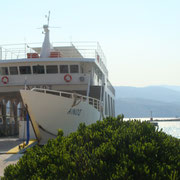 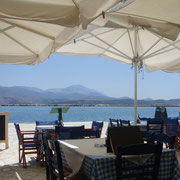