Ithaka (or Ithaki) is the fifth largest island of the Ionian Islands, which cover a ground of 96 km². The coastline measures about 100 km and lies 2 miles west from Kefalonia and 23 nautical miles east from Astakos, at the west coast of the Greek mainland.

Ithaka is a mountainous island, the highest summit is mount Niritos (806 m). The majority of the coast is steep and rocky, but there are also beautiful sand or pebble beaches washed by clear turquoise water. The climate of the Ionian Islands creates relatively cool summers on Ithaka and mild winters. Dense olive groves, beneath them scenic villages, cover the island and produce top quality olive oil and very good vines.

Ithaka's inhabitants are very sociable and open-minded in spirit; many of them are seamen or people who tried to find their luck in foreign countries. They all love their homeland and dream solely of their return.

The capital of Ithaka and it's main harbour is the attractive town Vathi (Vathy) also known under the same name as the island, Ithaka. Around a deep and secluded bay, much like an amphitheatre erected, was it identified as the Homeric harbour of Phorkys. At the entrance to the harbour lies the island Lazaretto. As it's name implies, it used to be a lazaret (hospital) and there exist as well ruins of a venetian prison. The harbour was protected by two small fortresses that were built in 1805 in the time of the second French Rule. The ruins are still visible at the harbour's entrance.

At the time of the great earthquake in 1953, the island was almost completely destroyed the same as Kefalonia, but many buildings were reconstructed in their original styles. It is worth a visit to the restored cathedral, dedicated to the Virgin Mary, and to the house where the hero of the Greek war of independence was born. 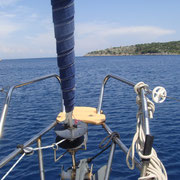 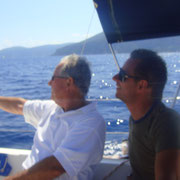 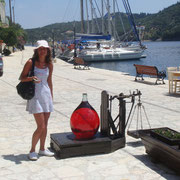