The most northern harbour of Kefalonia is Fiskardo and the main place of the peninsula Erissos.

Ferry boats from the neighbouring Lefkas and Ithaka Quay land here. Fiskardo, built in a bay, is a traditional fishermen's village, beautiful as a painting and especially attractive for summer holiday tourists. Remains of the past noblesse can be seen in the narrow streets, balconies with lots of flowers and the numerous protected buildings from the 18th century. Fiskardo is one of the few villages that was spared by the earthquake and is worth a visit. Only few inhabitants stay there during winter, which makes it seem “genuinely greek”.

The beach of Fiskardo is surrounded by forest and provides plenty of shadow. The elongated Foki- Bay is known for its clear, turquoise coloured water.

In the harbour of Fiskardo many taverns, bars and cafés line the waterside promenade. Fiskardos blooming and wooded setting invites to take prolonged strolls and hikes.

The hotels on Fiskardo are situated slightly higher and provide a stunning view of the sea, the village and the opposing island Ithaka. A small car ferry that lands in Fiskardo makes it possible to visit the island Ithaka or Lefkas. There are as well local holiday apartments and holiday chalets.

A lighthouse and a Norman church ruin, north of the harbour bay, are examples of Fiskardos sights. Diving and snorkelling in Fiskardo is highly recommendable. 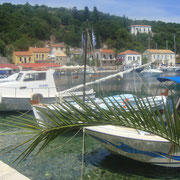 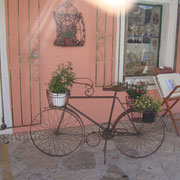 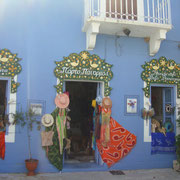