In1757 the Venetians founded the city Argostoli. The earthquake in the year 1953 destroyed great parts of the city. Nevertheless, the outward appearance remained untouched. Along the main street “Lithostroto” are located almost all the important sights, cafés, taverns, shopping and souvenir shops. Busy living and goings-on takes place around the market by the coast road. The Archaeological Museum (Rokou Vergoti) displays discoveries from Mycenaean and Roman times. The Korgialenios Library houses the Museum of Popular Art (Ilia Zervou), where next to interior decoration and costumes, interesting, historic photographs are displayed.

The famous sea mills can be seen 2,5 km north of the city by the coast road. The sea water, which is directed through an artificial draw, falls down through the chasms (“Katavothres”) of the Karstrocks into the depth and resurfaces by the east coast in the area of Karavomilos, among others in the Mellissáni Cave that lies above sea level.

At the top of the peninsula a small lighthouse formed in the shape of an ancient round temple arches up, rebuilt after the plan from 1820. The islands very frequented main beaches Makrys Gialos Platys Gialos, extend 5 km south.

Indeed, are remains of the ancient city Kranioi preserved 6 km southeast of Argostoli. 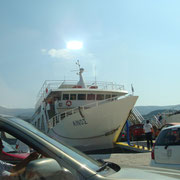 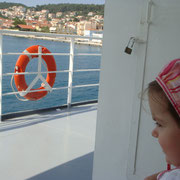 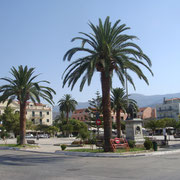